What is an Effect?

One of the most powerful features of the built in 5e ruleset is effects. It is also, judging by the number of forum posts, the area where most users find the learning curve steepest. In Fantasy Grounds an effect is anything which gives the character either a bonus or penalty of some kind to a dice roll they are about to make. In order for the effect to be properly executed the character must be on the Combat Tracker (CT) and either they or another actor must make a dice roll which involves the character. In other words effects are checked when a character attacks, does damage, makes a saving throw (including death saves) or makes an ability or skill check. Effects are also checked when that same character is attacked, or damaged or has a saving throw, ability check or skill check forced on them (such as from a spell).

Many effects are created automatically for you in the 5e ruleset by dragging and dropping from the source material such as the Player's Handbook. For example dragging spells into the actions tab will in almost every case create an effect. Where an effect is not created via this method the probability is very high that either the spell doesn't require an effect or Fantasy Grounds doesn't have a built in way to handle whatever the spell is trying to do. For example the spell 'Animal Messenger' doesn't require an effect since this spell and others like it are simply 'Theatre of the Mind' spells. As another example the spell 'Counterspell' won't create an effect either because Fantasy Grounds can't know what the difficulty class of the incoming spell might be. For more information see the 5E Character Sheet

In the case of NPCs effects appear on the Combat Tracker when the NPC is placed there either from the NPC list or from an encounter. This action causes Fantasy Grounds to attempt to parse the information contained in the NPC sheet and create the effects. Most of the standard NPCs from the Monster Manual will, when dragged to the Combat Tracker, create any necessary effects so that the DM can use them. Again, not everything will create an effect either because one isn't required or Fantasy Grounds doesn't have a way to create one. For more details see the 5E NPCs and Encounters and the section below on the wording used to create NPC effects.

In the player Character sheet effects are created in the actions tab. An effect can be added to an existing power or if no power exists a new one can be created. 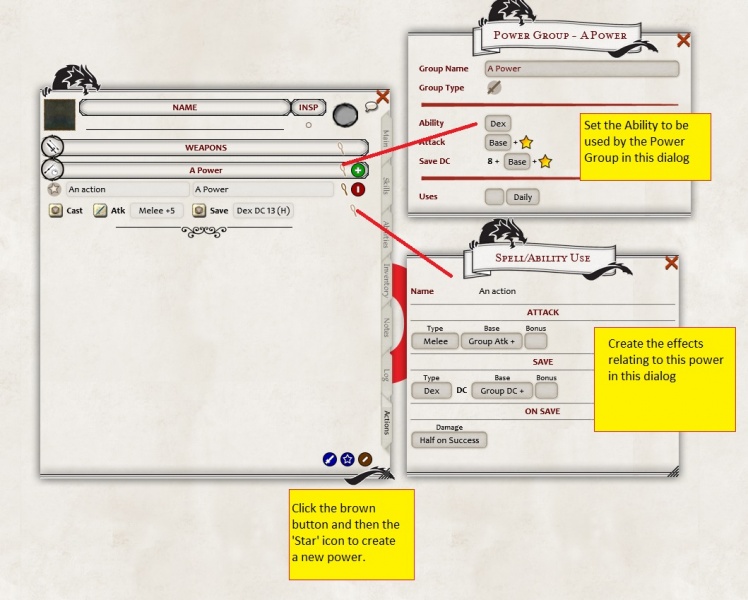 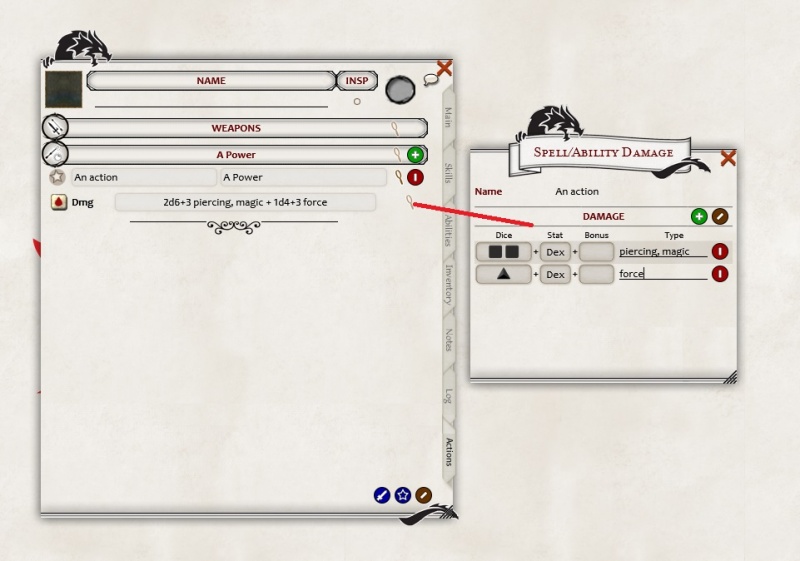 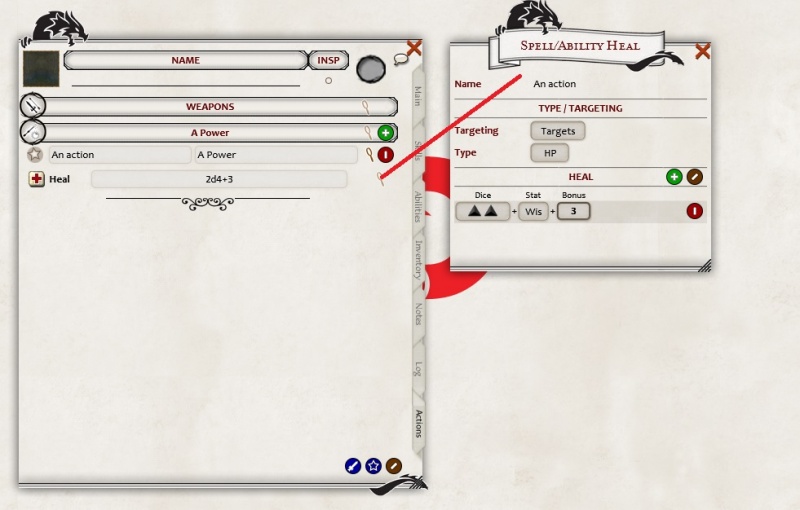 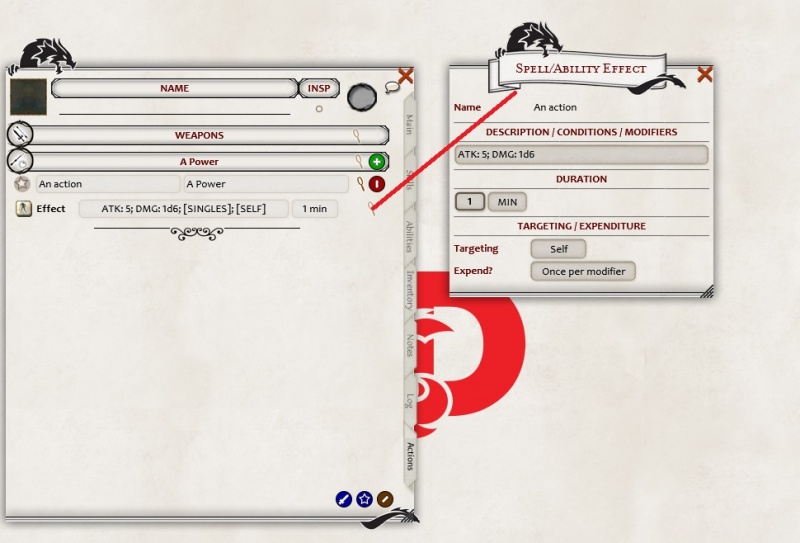 So let’s take a look at just one of the possible modifiers that you can use to create effects the ATK modifier. As its name suggests this modifies a character’s attack roll. Normally an attack is made by rolling a d20 but a variety of situations and spells can add or subtract from the number rolled.

Let’s start with a simple example, where the character has a spell cast on him which gives him a +1 to hit. This effect is written ‘ATK: 1’ (without the quotes). In longhand this is telling Fantasy Grounds to add 1 to the d20 dice roll when a player rolls to attack. The value after the modifier ATK can be a number or a dice value and either can be positive or negative. So we could have all of the following ATK: -1d6, ATK: 4, ATK: -2, ATK: 1d4. The format as you can see is always the modifier (ATK) followed by a colon ‘:’ followed by the value ‘1d4’.

In the case of ATK: 1d4 this will add a 1d4 to any attack roll that the player makes. However we can restrict this to just certain attacks by including a descriptor to the effect. Let’s say that we can only get a bonus on melee attacks; in that case our effect is written ‘ATK: 1d4, melee’. The descriptor is added after the value and separated by a comma ‘,’. Now when used on a character only melee attacks will benefit from the additional dice. If we substitute ‘ranged’ for ‘melee’ then only ranged attacks will get the benefit.

We can go even further and limit the benefit to only opportunity attacks. The format for this is ‘ATK: 1d4, opportunity’. Now FG needs to know when you are making an opportunity attack so when you make the attack hold down shift as you do so. If the player has the effect on him then he will get the bonus to the throw but otherwise nothing happens.

When an effect is applied to an actor in the combat tracker, some additional fields are available to the DM. See the 5E Combat Tracker for more details.

As described above in the dialog for Spell/Ability Effect there is a box for ‘Targeting’ which can be set either to ‘Targets’ or ‘Self’. It is important to understand that this isn’t asking you to tell Fantasy Grounds who the target of the effect is but rather where the effect should reside.

If we take a simple case of a character that has set up an effect to deal some extra damage, DMG: 1d6. It is the character who is the beneficiary of this additional damage (not the creature who is going to take it) and so when creating the effect the character needs to set the ‘Targeting’ box in the dialog to read ‘Self’. When the player clicks the action button to apply the effect it will correctly be set on the character even if he has a number of enemies targeted on the Combat Tracker (or none at all).

On the other hand suppose we have some spell or ability which means that an enemy gets disadvantage on attack rolls DISATK:. Clearly there’s no use this effect sitting on the character; it must be placed on an enemy and so when setting the targeting we make sure that it reads ‘Targets’.

So when setting the ‘Targeting’ to ‘Targets’ or ‘Self’ we need to think about what the effect is setting out to achieve, who should benefit or who should take the penalty. Once you have sorted that out you should be able to work out on which creature that effect should be sitting.

There is another layer of depth however to the effect system built into Fantasy Grounds – effect targeting. This concept is probably best illustrated with another example and we’ll use the wizard cantrip True Strike. This spell tells us that on your next turn you gain advantage on your first attack against the target of the spell. Let’s say our spellcaster is up against 6 Goblins and he is going to cast the spell on Goblin 3.

Based on the above we need to figure out who is going to benefit from this spell and clearly it is the caster and so the ‘Targeting’ of the effect needs to be set to ‘Self’. So we set up an effect ADVATK: and set the targeting to ‘Self’. We click on the action button and it places the effect on the Wizard. However there’s a problem because we have just given our Wizard advantage on every attack roll he makes against any Goblin, not just Goblin 3.

What we need to do then is target this effect only at Goblin 3 and we do this by holding down SHIFT and dragging the effect onto Goblin 3. You will see that when you do so the effect appears on the Wizard (because we set the targeting to Self) not on Goblin 3. Now our Wizard will only get advantage on an attack against Goblin 3.

A similar kind of situation arises with the Hex spell which allows the caster to get an additional 1d6 necrotic damage against whomever the spell is cast upon. We create the effect DMG: 1d6 necrotic; and set the targeting to ‘Self’. When cast shift-drag the effect onto the target. Now, only against that target will the caster get the additional damage.

It needs to be noted that not every modifier can be used in this way. Modifiers which can be make use of effect targeting have a ‘T’ in the ‘Notes’ column in the tables below. For convenience these are ATK, AC, DMG, Invisible, RESIST, VULN, IMMUNE, COVER, SCOVER, ADVATK, DISATK, GRANTADVATK, GRANTDISATK.

A Word on Syntax

As has been seen from the notes above there is a syntax which must be followed so that effects will work successfully.

In many cases when a Spellcaster casts a spell they must maintain concentration on that spell for the duration. If, whilst concentrating on a spell, the spellcaster takes damage they must make a Constitution saving throw with a DC of 10 or half the damage whichever is greater. On a failure concentration on the spell is lost. Fantasy Grounds can handle this automatically provided that the effect is affixed with ;(C). If the caster who is concentrating on the spell takes damage Fantasy Grounds will make the appropriate saving throw and on a failure remove any effects from any actors who are being influenced by the spell.

So, for example, if an effect is created for the Bless spell then it should be ATK: 1;SAVE: 1;(C)

The following sections details the conditions, modifiers and other components which can be used to create effects within the 5e ruleset. A number of examples are also provide to help users get started.

A Note on IF and IFT

What both these functions do is test a condition and if it is found to be true then the next part of the statement will be carried out, otherwise it will be ignored.

Let’s take the example IF: invisible; DISSAV strength. What this is saying is that if the character on which this effect is placed is invisible then they will have disadvantage on strength saving throws otherwise nothing happens.

Not only can IF and IFT test conditions (such as poisoned, grappled, invisible, etc.) but they can also test for conditional operators. There are five of these ALIGN, SIZE, TYPE, Wounded and Bloodied. As their name suggests, the first three operators test for the alignment, size and type of a creature. Wounded tests to see if the character has any wounds and Bloodied will return true if the target has wounds greater or equal to half of their maximum hit points.

Taken together the testing components and the conditions which they can test for mean that extremely powerful effects can be set up and these are particularly apposite to magic item creation and use. See examples below.

When applying effects from the Actions tab of the PC sheet, special tags can be inserted to provide numerical bonuses based on the PC's current attributes.

IF and IFT Examples

FG latches on to certain key words and phrases in traits and actions and creates effect from those words which then appear on the Combat Tracker. For users wishing to create their own NPCs the following contains guidance on how to create these effects.

The parser will recognise all of the standard conditions listed in the PHB at appendix A except for exhaustion.

These are handled by filling in the appropriate boxes in the NPC sheet. Each damage type should be entered in lower case and if more than one separated by a comma. If the resistance or immunity can be overcome by certain weapon types or by magical weapons then there is wording which can be used to create the proper effect on the CT.

If the NPC can cast spells then you can automate the population of the actual spells into the NPC sheet. Additionally with the correct wording Fantasy Grounds will work out the attacks and spell save DCs where those are present in the spell. The trait for Spellcasting and Innate Spellcasting are given below.